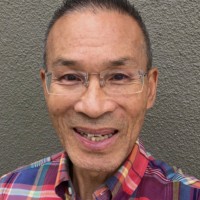 Van, the son of Vietnamese immigrants, spent over 39 years working as a holistic dentist in San Francisco.  He retired from dentistry earlier this year and currently lives near Sedona, Arizona, with his partner, Lynn.

Van has been a long-time teacher for over 22 years, starting in 1996, as one of the earliest of the first wave of teachers trained by Saniel Bonder, founder of Waking Down in Mutuality, the “ancestor organization” out of which Trillium Awakening emerged.  As an honored elder teacher, he is a member of the Elders Council of the Trillium Awakening Teachers Circle.

As a teacher, Van both honors the spiritual traditions and is moved to creatively innovate and synthesize new evolutionary expressions of what came before.  In the early days of Waking Down, he was the unofficial “dharma guardian.” along with being known as one of the ongoing progressive supporters of the organic “spontaneous revelation of Being.”

Spiritual transmission has always played a vital and important role in Van’s realization process. When Van first went to sit with Saniel, in June of 1995, in a ripe state of receptivity, Saniel’s potent transmission helped catalyze the initiation of the “embodied feeling witness consciousness”.  Through continued study and transmission, the Second Birth, or what we now call Whole-being Realization in Trillium Awakening, rapidly unfolded about 7 weeks later.

In the summer of 2000, Van had a further deepening of his realization through the nectarous spiritual transmission of the Heart-Awakened teacher, David Spero, who is a master in the Divine Mother lineage.  Van was immersed in the transmission of the Mother-Consciousness, whereby he experienced an ecstatic Radiant Love-Bliss intoxication.  The additional aspects of the energetic Shakti-current and the devotional Love-Bliss effulgence of Divine Being were combined with the already established seamless awakened ground of embodied Consciousness.

Over years of continued exposure to David’s transmission, Van noticed a catalytic acceleration of the deepening of his Whole-Being Realization into more advanced stages, where the inherent Divine Unity between the absolute and the relative–the transcendental and the material, the divine and human–further intensified.  The divinization of the body-mind and the material world unfolded into greater fullness, within the all-inclusive Unity.

In this deepening process, full of transmission and Grace, Van rediscovered that in addition to having a keen discriminative capacity of insight and understanding, he was also an ecstatic devotional mystic, who is oriented toward the Feminine Face of Supreme Divine Being. He is a lover of Love-Bliss inebriation and the Mother-Shakti, who feels that Radiant Supreme Love is the Heart of existence, with Transcendental Consciousness being the fundamental ground–the Body of existence.

As a teacher, Van wishes to bring more of these expanded elements into Trillium Awakening to enrich our lives, both before and after awakening.

*To schedule a Whole Being Clarifying Conversation send an email to Van with your request.

A more full library of audio and video are available at: http://divinelovebliss.com/audio-video/