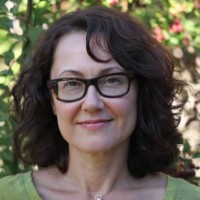 Almost 8 billion people on earth and yet each one is unique! As a mentor in the Trillium Awakening community, my role is to listen in a particular way that mirrors and reflects your self-expression. Listening seems to be an undervalued quality of human mutuality among the business world from which I arrive here. For me, learning to “greenlight” what is expressed has become a form of love…for uniqueness.

My background includes formal education and business experience in advertising, marketing, and management, ending with 12 years as an academic professor at a business school in Spain researching and teaching leadership to international MBA students.

I began the personal development path about 25 years ago, starting with Landmark Education forum in 1997, then training as a personal coach via CoachU in 1999 and CTI’s leadership program in 2010, and coaching people to discover their soul purpose via the True Purpose Institute in 2018.

Since 2002, Integral Theory and its AQAL framework developed by Ken Wilber has been my primary way of understanding the complexities of modern human culture, individual development, and collective change.

In 2011, I began intense dedication to meditations exploring inner experience and awareness, attending retreats by Craig Hamilton and Andrew Cohen, then Evolutionary Collective retreat by Patricia Albere and Jeff Carriera. I was surprised to discover my inner world to be as complex and varied as the outer world.

In summer of 2014, I began a dramatic shift in Whole Being Realization, after presenting at the first Integral conference in Europe (IEC) and while participating in the foundational programs of the Presencing Institute in Berlin to learn Theory U through embodied social presencing. I felt overwhelmed and desperately sought help to understand what was happening to me, and luckily connected with Deborah Boyar from the Trillium community within two weeks of that first initiation into WBR.  During this year I was also participating in a thought-provoking course on Authenticity by Bonnitta Roy who presents her ideas as “post-integral” and held a retreat on her horse farm.

By 2016 as I began to feel my body more fully, I recognized the life I was living was not one of integrity to myself. Instead it was endless seeking of security and validation from the external power structures of the world through aligning with power-oriented people and performance measures. So I let go and moved back to the states, to heal my body, mind, and soon to be discovered soul.

After a few years of isolated living in New Mexico, including two years of focused somatic healing with acupuncture and biodynamic craniosacral, my intuition told me I would be leaving my location within six months, but I had no idea where. Within the next month, during a morning meditation in October 2018, I saw a kind of light in the galaxy near Nepture and Uranus in my mind’s eye, that reminded me of a man I knew during my last year in college. I had been in love with him, obsessed a bit, but we never had an intimate relationship then. Now almost 30 years later without contact, I looked him up on facebook, and we began texting that day. Within four months, he arrived to my door for a visit, and within another month I packed up my stuff, let go of 40-50% of it, put the rest in storage, and went on the road to live with him for a few weeks. Eventually we ended up returning to his place in the Chicago area to experiment with living together, and here we still are;-)

After the first conversation with him in 2018, the next day another major initiation and spiritual experience unfolded, very similar to my “second birth” so I like to call it a “third birth” yet it was clearly different. This time it seemed to an awakening to my soul and its condition. It felt like suddenly I was able to sense my subtle spiritual body in new ways, and see where its fissures and holes were, as well as feel where blockages were located in my physical body. Similar to my first WBR, as the opening began, I went through another round of intense emotions, crying for weeks, as well as a unique form of life review each time.

Before 2018, I did not believe in a personal God (and looked down upon those who did). There was only the impersonal divine cosmos and consciousness that may be expressing itself through me that quantum physics can explain. But after all the experiences described above and then reuniting with my soul-mate, many new surprising dimensions of our universe have opened up in my awareness that I am still learning to digest and integrate. Currently I sense there is a creator of the universe (the source of masculine and feminine divine qualities as well as divine love). Also, I am beginning to discover a world in which the soul lives on after the physical body dies. It seems like we are embedded in multiple dimensions simultaneously, as well as have capacity for feelings of relatedness and emotions between the dimensions of our selves, souls, and source: physical body>subtle spirit body>soul>source

In Trillium terminology this maps as: embodiment>consciousness>being>mystery.

If any of this resonates, and you sense that I may be of service as a mentor in your unique developmental journey, then contact me for an initial session for us to experiment.