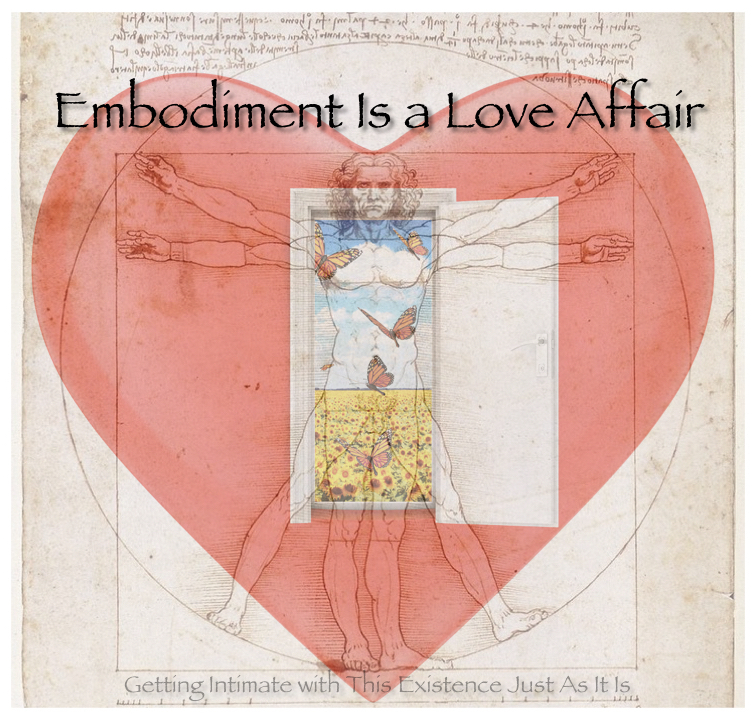 EMBODIMENT IS A LOVE AFFAIR:
Getting Intimate with This Existence Just As It Is

It’s exciting to look around and see that “embodiment” work is such a thing these days. It’s everywhere in the personal and spiritual development scene. So, is there something distinctive in the way Trillium Awakening nurtures the embodiment process?

In the TA approach, embodiment can certainly be complemented by familiar body-based practices like yoga, dance, and mindfulness of the body, by subtle-body work with the chakra system, or by body-oriented therapies like Hakomi and Somatic Experiencing, and so on. But what is it, more fundamentally, that brings the shift into conscious embodiment in this work—which no amount of dance or yoga practice could bring?

In Trillium Awakening, it turns out that mutuality is the doorway to conscious embodiment, which then opens the way to recognize our very self at the place where spirit and matter kiss. Embodiment is the central movement in the birthing and maturation of your whole-being self, and it’s activated by the welcoming smile of love-mutuality. In Trillium Awakening, embodiment is a love affair. And over time, what is embodied in this way expands to reveal our universal body—inclusive of the entire field of this existence.

This weekend workshop will include teacher presentations, emergent conversations, and experiential discovery work in pairs, triads and small groups to support the realization and further integration of your embodied wholeness.

Ralf Humphries is a midwife of awakening, supporting individuals in the birthing of their whole-being self. His post-natal support continues to be valuable as individuals mature through seven archteypal stages of wholeness unfolding in awakened life. Ralf enjoyed a distinguished academic career in the 1990’s, before stepping away in 2003 and spending five years as a Theravada buddhist monk. In the last decade, Ralf has worked as a psychotherapy educator and a senior rehabilitation clinician. He currently has a private practice as a therapist, is an interning teacher with Trillium Awakening, and is a teacher of the Whole-Being Evolution Path™. Ralf lives with his partner in Melbourne, Australia.

In 2006, Ardith was inspired to begin the journey to Whole Being Realization after watching a dear friend who was involved in “This Work” be transformed. In 2012, she became a full Trillium Awakening Teacher. “This TA work has profoundly changed my life. Sharing this work and the gifts it can bring is my passion.” Ardith has been a Reiki practitioner for over 35 years and has served as a certified Breath Practitioner for almost 29 years. Most recently she completed the teacher training programs for Judith Blackstone’s Realization Process. Ardith lives in a small town called Yellowknife in the Northwest Territories in Canada, where she has owned and operated a music studio while raising her two boys.

Debbie Amos has been actively involved with Trillium Awakening since 2009. Listening to the audiobook of Saniel Bonder’s Waking Down around that time, she immediately recognised an approach that was in alignment with her own felt sense—one that valued the whole person, held space for the transformation that can come with investigation of self and other as well as consciousness, and which recognises them as part of the same whole. Her path with Trillium Awakening lead to a spiritual awakening—but also a personal awakening into a rich fullness of self. Debbie has a Bachelor of Psychology, teaches meditation, mindfulness, and Qigong, and is a Transformational coach. She lives in Melbourne, Australia.

Felix Link is a new mentor and is excited to be of service to you on your journey with Trillium. Born to German parents and having grown up in Thailand,  he moved back to Bangkok in 2017 after 12 years or so of being a passionate seeker. He’s lived in Nepal for a couple of years to dive deep with Tibetan Buddhism, a year at a spiritist centre in Brazil, and beyond that has spent years with different paths and various forms of therapy, trying to find what he eventually found with Trillium. Which is to say: much greater well-being, connection and a sense of freedom.